Foods that are Toxic for Dogs 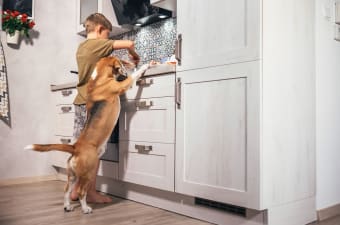 Our Johns Creek veterinary team knows that loving dog owners enjoying giving their pup a little treat now and again. However, some people-food are toxic (or even deadly) to dogs. Below is a list of food you should absolutely never feed to your puppy or dog.

Why shouldn't I give my dog people-food?

Dogs are pretty clever and sometimes they manage to get their paws on something they shouldn't. When it comes to food, it's key to understand which of the foods we enjoy and keep around the house which are actually toxic to dogs.

Since your dog's body doesn't metabolize food in the same way your human body does, some things which are relatively harmless or even healthy to people can be deadly to dogs.

10 Foods You Should Never Give Your Dog

Remember that this is just a summary of some of the most common toxic foods for dogs. This isn't a comprehensive list and to find out more about which foods are toxic or poisonous to dogs you should always speak with your Johns Creek vet.

Onions, shallots, garlic and chives all contain a substance which may damage your dog's red blood cells and cause anemia. The onion family, whether cooked or raw, are toxic to dogs and it may take days for any signs of illness to appear after ingestion.

Even in incredibly small amounts, alcohol can cause intoxication in dogs just like it does for people. If your dog ingests alcohol, it may lead to vomiting, diarrhea and in more extreme cases, damage to your pup's nervous system.

Any cookies, cakes or other treats containing grapes or raisins should be kept well away from dogs. Grapes and raisins may cause severe liver damage or even kidney failure in dogs.

Chocolate, particularly dark chocolate, contains a stimulant called theobromine which can cause kidney failure in dogs.

Corn On The Cob

While corn kernels themselves aren't toxic to dogs, if your pup swallows the cob it can cause serious blockage in their intestines

While tobacco isn't food, it's important to mention here because nicotine is incredibly toxic to our canine companions. Tobacco poisoning in dogs may show itself through abnormal heart rates, weakness, tremors and vomiting.

The artificial sweetener called Xylitol may cause vomiting, loss of coordination, seizures, liver failure and possibly hypoglycaemia which can lead to loss of consciousness or even death in extreme cases.

There is a toxin in macadamia nuts which can cause weakness, swollen limbs and excessive panting in your pup.

Avocado leaves, fruit and seeds contain a substance called persin which may cause vomiting and diarrhea in dogs.

It may be tempting but never give your dog cooked bones to chew on. Cooked bones splinter easily and could lead to a perforation of the gut, which can be fatal.

If your dog has ingested any of the above items, call our Johns Creek vet as soon as possible. At Johns Creek Veterinary Clinic, we offer emergency services for dogs during our regular business hours.

Caring for Pets in Johns Creek